An atomic force microscope (AFM) is a very sensitive instrument, often mounted in the lab on a special table which dampens vibrations. Now think of a rocket launch – about as far from “vibration free” as you can get! So designing an AFM for space was a challenge. It has to be capable of surviving the rough ride into orbit, and yet still make precision movements and measurements. In this post I’ll talk a bit about some of the measures taken in the design of MIDAS, the AFM on-board the Rosetta spacecraft, to address this issue.

Although space engineers typically try to avoid mechanisms and moving parts, sometimes they’re necessary. And the very nature of an AFM, which moves a sharp tip over the surface of a sample, means that we cannot avoid moving parts!

We have a coarse approach stage which moves the microscope into contact with the sample.

We have a wheel which rotates to move the sample from its exposure position, facing out to space, to its scanning position. And the wheel can also be moved sideways in front of one of the sixteen cantilevers.

Then there is a shutter which opens and closes to control when dust is allowed into the instrument, and a “one off” cover which protected the instrument from contamination before and during launch.

Finally the actual scanning mechanism, our XYZ stage, has to move in three dimensions.

All of these mechanisms had to be designed to move on demand, and to still work after ten years in space, but at the same time survive the launch. To manage this the engineers designing MIDAS used pretty much every trick in the book, from shape memory alloys and paraffin actuators to pyrotechnic bolts and good old friction.

To give you an idea, here is a list of the key mechanisms and actuators on MIDAS, what they are for, and how they work.. 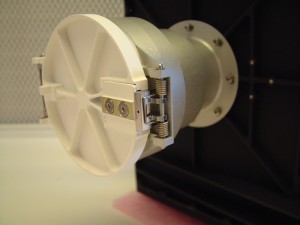 The MIDAS funnel with the one-shot cover, in closed position 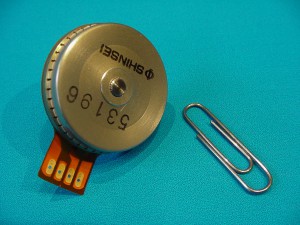 One of the commercial pizeo motors refitted and used in MIDAS

Hopefully that gives you some idea of the immense thought and care that has to be taken to take an instrument that works on the Earth and make it survive launch, 10 years of flight, and be ready to unlock the secrets of the Solar System… watch this space! 🙂